By Adriana Maldonado, May 2017

Pranayama has been translated as the “extension of prana (breath or life force)” (Wikipedia 2017) or “breath control”. In the yogic tradition both definitions are used, the first as a subtle description and the second as the practical and systematic description. Etymologically, pranayama is composed by two words in Sanskrit, prana, meaning life force, and ayama, meaning to restrain or control the prana or to extend.

B.K.S. Iyengar cites Swatmarama: “When the breath wanders the mind is unsteady. But when the breath is calmed, the mind too will be still.” This is verse 2 of chapter 2 and it presents the reason why pranayama is practised in hatha yoga. And in the context of the HYP, pranayama is a series of practices that have the goal of regulating the prana or energy flow in the body. There are five prana vayus, currents of energy or pranic air functions in the body: apana, prana, samana, udana and vyana. When these five vayus function in harmony, they bring health and vitality to the body and mind (Anderson, Yoga International, 2017). They are associated with different parts of the body and have different functions: Prana vayu is associated with the chest and head and governs intake, inspiration, propulsion, forward momentum. Apana vayu is related to the pelvis and governs elimination, downward and outward movement. Samana vayu is around the navel and governs assimilation, discernment, inner absorption and consolidation. Udana vayu is associated with the throat and governs growth, speech, expression, ascension and upward movement. And finally vyana vayu is related to the whole body, governs circulation on all levels, expansiveness, and pervasiveness (See Idem).

And these currents of energy or pranic flow travel through the nadis in the body. According to the yogic tradition, there are thousands and thousands of nadis or channels where energy flows through the body. To be able to practice pranayama in an efficient way, the nadis have to be purified. The vayus do not enter a nadi if it is full of impurities; this is the main message in verse 4 of chapter 2. The most important nadis are: ida, pingala and the sushumna nadis; this later being the central channel, runs from the bottom of the spine to the crown of the head, passing through each of the seven chakras (Bailey, Yoga Journal, 2007). Sushumna is the chanel “which kundalini shakti (the latent serpent power) –and the higher spititual consciousness it can fuel – rises up from its origin at the muladhara (root) chakra…to the sahasrara chakra at the crown of the head. In subtle body terms, the sushumna nadi is the path to enlightenment” (Idem). The ida and pingala nadis spiral around the sushumna nadi, like the DNA. They meet at the ajna chakra. Ida and Pingala represent the duality in everything, ida the moon, pingala the sun, the feminine and the masculine, white and red; the left and right hemispheres of the brain. The idea is also to keep both balanced to avoid dominance from ida or pingala, dominance of one of them may result in changes in personality and health.

In this context, the chakras are the centres of storing energy or prana. Chakras are “a circling motion or wheel” (Muktibodhananda, 1998). The chakras from base of the spine to crown of the head are: Muladhara, Swadhisthana, Manipura, Anahata, Vishuddhi, Ajna, Bindu, and Sahasrara. They all influence different parts of the body and are related to different functions, colours, animals and the bodily senses.

In order to practise pranayama, the mind needs to be in a sattwic state, meaning that the mind should be steady and not moving from thought to thought.

The first practice described by the HYP is Nadi Shodhana. This is the alternate nostril breathing, which is said to activate and harmonise ida and pingala nadis, shodhana means ‘to purify’ (Muktibodhananda 1998). The technique is described as sitting in padmasana (or siddhasana according to Muktibodhananda 1998), inhaling through the left nostril, closing the right nostril with the right thumb holding the breath, and then exhaling through the right nostril. Then inhaling through the right nostril, closing the left nostril with the third finger and holding (retention of breath is called kumbhaka) and then exhaling completely though the left nostril. So the inhale is done through the same nostril which exhalation was done. Muktibodhananda explains progressive rations for nadi shodhana: 1:1 (Inhaling –I- and exhaling –E-), 1:2 (I-E), 1:2:2 (I- retaining –kumbhaka- -R-E), 1:4:2 (I-R-E), 1:4:2:3 (I-R-E-Retaining). Muktibodhananda also gives other techniques on the same nadi shodhana. Swatmarama affirms that after three months of practising nadi shodhana all nadis will be purified. 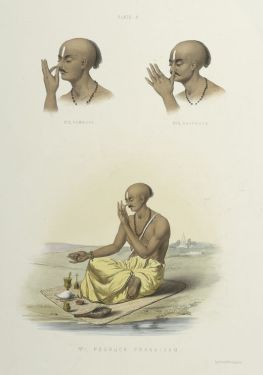 If there is excess of mucus or other physical issues making difficult the practise of pranayama, then the shatkarmas come useful (please see above about the shatkarmas).

You could introduce nadi shodhana with a simple ratio in your classes: 1:0:1:0, then 1:1:1:1 and back to 1:0:1:0; it is a fairly accessible practice, easy to explain and present its benefits, and as I’ve seen in other classes, people are quite enthusiastic to practise it.

Other pranayama techniques are described later and the most relevant are:

Ujjayi, is a pranayama that consist in inhaling through the nose, closing the mouth and retaining the inhalation, then exhaling also through the nose. Both inhalation and exhalation produce a sound by slightly contracting the back of the throat, both are deep and long and controlled. This is probably the pranayama that I teach the most, as it is quite simple to perform and in my experience it is very effective. I introduce ratios with retention as in nadi shodhana, without using the hands, with them just resting on the knees or in chin mudra; I also teach it during asana practice to encourage a ‘moving meditation’.

Surya Bhedana, similar to nadi shodhana, this pranayama consists in breathing in through the right nostril (or left as described by Muktibodhananda), retaining the breath, exhaling through the left nostril slowly and keeping the right closed. During retention jalandhara bandha and moola bandha are also performed closing both nostrils, then releasing moola bandha then jalandhara bandha and raising the head. If necessary, Muktibodhananda mentions that a few breaths can be taken in between rounds and suggests practising up to ten rounds.

Seetkari is performed by inhaling in through the mouth, making a hissing sound with the teeth closed. This practice results in a coolness sensation. Sitting in a comfortable sitting position and closing the eyes, keeping the hands on the knees in chin or jnana mudra, practising kaya sthairyam[i] for a couple of minutes, bringing the lower and upper teeth together and separating the lips as much as is comfortable and breathing slowly through the gaps in the teeth. Listening to the sound that the inhalation produces and closing the mouth to exhale slowly through the nose. Muktibodhananda suggests repeating the process up to twenty times. It can also be performed practising retention and jalandhara bandha and moola bandha.

Sheetali, in this pranayama the inhalation is made through the tongue –like a tube-, practising kunbhaka and then exhaling the air though the nostrils. Like seetkari, this pranayama was designed to reduce body temperature. It is also possible to practise it, as in seetkari, while performing jalandhara and moola bandhas during retention.

Bhastrika, the name comes from bhastra, meaning ‘bellows’. Bhastrika pranayama is similar to vatakrama kapalbhati, but here both the inhalation and the exhalation are equal. Sitting comfortably with the eyes closed and the hands on the knees, taking a deep breath in, breathing out quickly and forcefully through the nose and immediately afterwards breathing in with the same force. After ten breaths, with the same force, take a deep breath in and out slowly to finish a round. Muktibodhananda suggests practising three to five rounds.

And Bhramari, the humming bee breath, is a calming pranayama that imitates the sound of a black bee, some other people say the sound of a humming bird. Sitting in a comfortable meditative posture, keeping the eyes closed, “inhaling slowly through the nose, listening to the sound and closing the ears with the index and middle fingers by pressing the middle outer part of the ear ligament into the ear hole. Keep the ears closed and exhale, making a deep soft humming sound.” When you have finished exhaling, bring the hands to the knees and breathe in slowly. Muktibodhananda suggests performing ten to twenty rounds and when finished, keeping the eyes closed listening for any subtle sounds (Muktibodhananda 1998). I think this pranayama is very accessible and simple to perform, I have already introduced this practice in my classes and it has had a good reception. Particularly with my classes with mothers and babies, it had a great calming effect on the babies.

[i] Kaya sthairyam is a meditative process that starts by concentrating or focussing on our own breath.